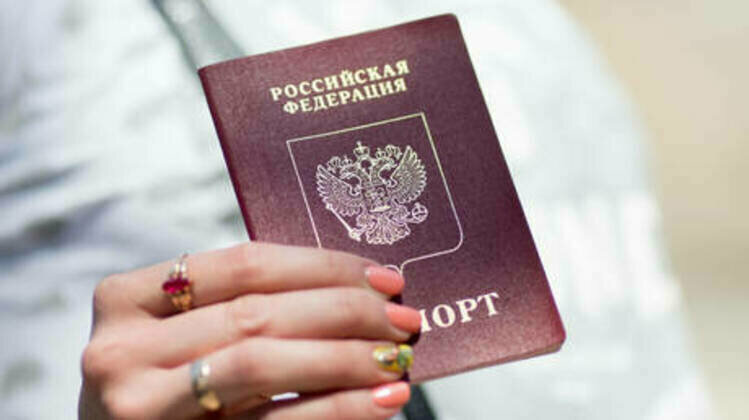 Residents of two Russia-controlled Ukrainian regions will be able to apply for Russian citizenship under a fast-track scheme, according to a decree signed by President Vladimir Putin on Wednesday.

The presidential decree modifies a 2019 document, which established a simplified procedure for obtaining Russian passports for some permanent residents of the Donetsk and Lugansk regions of Ukraine. People living in the parts controlled by the breakaway Donetsk and Lugansk People's Republics were deemed eligible for the scheme under which the citizenship paperwork could be processed in just three months. As of February, 950,000 people had reportedly filed applications and 770,000 of them had become Russian citizens. Moscow has since recognized the two Donbass entities as sovereign states.

The new decree adds the residents of Zaporozhye and Kherson regions in the south of Ukraine to those eligible for the citizenship scheme. Russian troops assumed control of both of them in the early days of the military campaign, which started three months ago.

The Russia-backed authorities in the two regions have stated that they envision their future as part of Russia and that people living there overwhelmingly wanted to be Russian citizens.

Russia attacked the neighboring state in late February, following Ukraine's failure to implement the terms of the Minsk agreements, first signed in 2014, and Moscow's eventual recognition of the Donbass republics of Donetsk and Lugansk. The German- and French-brokered protocols were designed to give the breakaway regions special status within the Ukrainian state.

The Kremlin has since demanded that Ukraine officially declare itself a neutral country that will never join the US-led NATO military bloc. Kiev insists the Russian offensive was completely unprovoked and has denied claims it was planning to retake the two republics by force.

WASHINGTON D.C.: In a cardboard box factory outside Baltimore, people have been walking into the office of Paul Centenari, chief ...

DELFT, Netherlands: IKEA officials said this week that the furniture retailer's warehouses in Europe are as full as they were ...

WASHINGTON D.C.: Due to the record high trade deficit and a resurgence in COVID-19 infections that curbed spending on services, ...

TAIPEI, Taiwan: The world's fourth largest chip designer by revenue, Taiwan's MediaTek, has told Reuters that it plans to create ...

LONDON, England: A UK parliamentary committee has told lawmakers that they may not bring babies to parliamentary proceedings and debates.The ...

DUBAI, UAE: The Arab states have built significant amounts of solar and wind power installations, and are in line to ...

ASSAM, India: During this week's heavy rains, which caused the region's worst floods in years, staff at the Cachar Cancer ...

KAREN STATE, Myanmar - Over the past three days, an army outpost meters away from Myanmar's border with Thailand has ...

Unable to staff airports, Germany to bring in foreign workers

BERLIN, Germany: A German Interior Ministry spokesperson has said that in a bid to relieve airports overwhelmed by staff shortages ...

WATFORD, UK: Watford F.C. has cancelled a friendly match against the Qatar national team due to the Gulf country's human ...