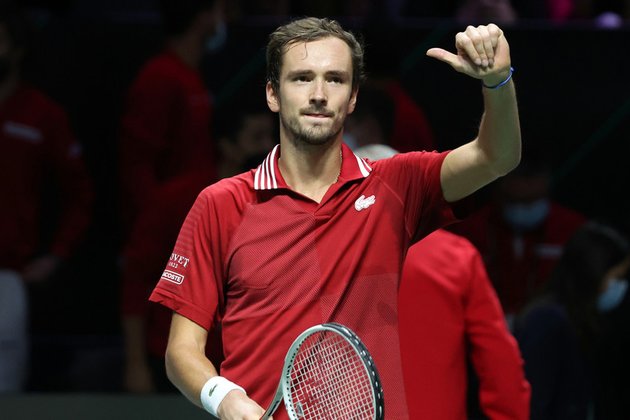 Reigning US Open champion Daniil Medvedev has spoken in support of the WTA after it suspended all competitions in China amid the row surrounding former women's doubles world number one Peng Shuai.

The move by the Women's Tennis Association was made in solidarity with Chinese star Peng, who made sexual assault accusations against former vice-premier Zhang Gaoli before disappearing from the public eye last month.

The International Olympic Committee (IOC) has since spoken with the star twice and public clips of Peng have been shared by Chinese state media.

However, the WTA remains dissatisfied and has demanded assurances that the assault claims seemingly made by Peng are fully investigated.

To that end, WTA boss Steve Simon announced this week that tournaments in China would be suspended.

Asked for his thoughts by Eurosport while playing at the Davis Cup for Russia, Medvedev commended the WTA's action as "strong".

"If a tournament was held in China next week, probably no one would be comfortable," he said.

"However, the next ATP tournament [in China] is in the autumn, let's see how things go," said the world number two.

"There are problems in a lot of countries, and yet we play tennis tournaments in most of them," Medvedev highlighted.

"What we all want is to see that Peng is fine, which we do not know 100%. The WTA made a strong decision, but I don't want to blame anyone who doesn't make the same decision.

"Maybe Andrea [Gaudenzi, the president of ATP] has another vision, I do not want to say who did well or bad," he finished.

"I support fully the WTA's stance because we don't have enough information about Peng Shuai and her well-being," said the Serb, also from the Davis Cup.

"I think the position of the WTA is very bold and very courageous. Her health was of the utmost importance to the world of tennis."

Medvedev helped Russia ease past Sweden and into the semi-finals of the tournament in Madrid, where they will meet Germany on Saturday.

The other semi-final will be contested by Serbia and Croatia.

SATKHIRA, Bangladesh - The Royal Institute of British Architects (RIBA) has recognized an 80-bed Bangladeshi hospital in the coastal area ...

BRUSSELS, Belgium: A European Union watchdog, the European Court of Auditors (ECA), has warned that the EU faces considerable economic ...