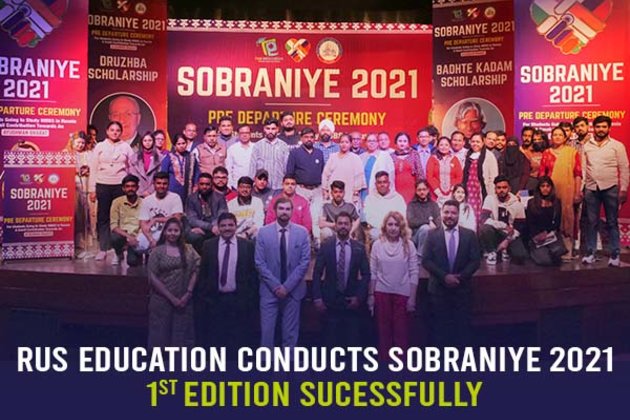 The Managing Director of Rus Education, Syed I. Rigan also addressed the batch of students and uplifted their enthusiasm as they commenced towards creating their new identity.

During the event, students were presented with the 'Druzhba Scholarship' in honour of Alexander Kadakin, ex-Ambassador of Russia in India and the 'Badhte Kadam Scholarship' in honour of Dr. APJ Abdul Kalam, former President of India for their remarkable performances in academics. The event marked the graceful presence of Vasilli Shagap, Russian House, New Delhi; Dr. N.K. Sharma, BiologistLecturer; and Elena Barman, Head of Education Department of Russian House, New Delhi along with the Managing Director of Rus Education, Syed I. Rigan.

Elena Barman interacted with several parents to assure and console them as they also enter a new phase along with their children. She sympathised with the mothers who were saying goodbyes to their wards. She too promised that at no point in time the students in Russia would be left unattended during their study. She guaranteed them unconditional support in any form they might need during these 6 years. Several parents also joined the stage to share their experience, concerns and joy as their wards departed in the due time. As a special guest, Dr Joydeep Dutta, a former MBBS student of Russia and now a successful doctor in India guided and motivated the students to guide them for their journey of studying MBBS in Russia.

The guests shared the stage to bless the students for their upcoming journey. Shagap presented and assured the complete support from the Russian House in New Delhi, the cultural department of the Embassy of the Russian Federation in India, to all the students. He also welcomed the students travelling to study MBBS in Russia, to experience student life in Russia with open arms. Dr N. K. Sharma congratulated the students for qualifying for the NEET exam and motivated them to conquer the upcoming challenges they would face while taking a step forwards to their dreams.

Rus Education is the pioneer of promoting medical education in Russia for the past 29 years. With its grand history, it is a part of thousands of success stories. Due to the sudden onslaught of the pandemic and covid restriction all over the country last year, the event was conducted on a virtual platform. However, keeping in view of the covid restrictions and avoiding large gatherings, Rus Education would be conducting the Sobraniye in several editions. After the successful 1st edition of Sobraniye, the next edition is probably scheduled to be held on 25th November 2021, Thursday at Kamani Auditorium, New Delhi 110001.

In India, thousands of students board their flights to study MBBS in Russia, as the country is specifically popular for its affordable medical studies. Russian medical universities often witness a good number of students from different parts of the world given its good quality of education on a pocket-friendly budget.

The event concluded with group photographs of the students, their family members and the honorary guests sharing the stage. After the ceremony was concluded, the students and parents joined the High Tea in the courtyard of the venue. Later, the students got into the reserved busesaccompanied by two representatives of Rus Education taking them to the Indira Gandhi International Airport, Delhi to board their flights.

To know more, visit -This story is provided by SRV. ANI will not be responsible in any way for the content of this article. (ANI/SRV)

Stock markets in Asia forge ahead on back of global rally

SYDNEY, NSW, Australia - Stocks in Asia continued the merry-go-round on Wednesday as investors the world over swarmed stock markets ...

TORRANCE, California: Honda is recalling some 725,000 SUVs and pick-up trucks due to faulty hoods that could open while vehicles ...