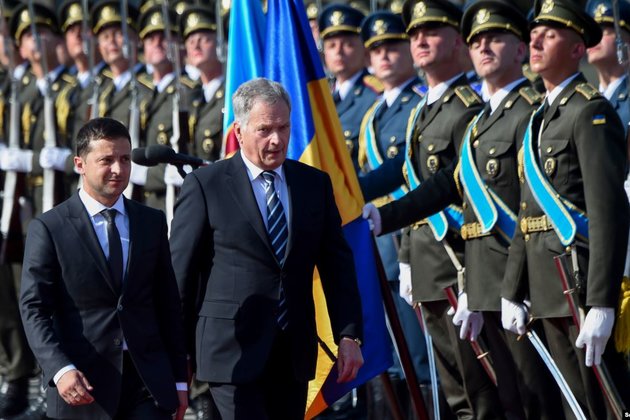 KYIV -- Valeria Hontareva, the former chief of the National Bank of Ukraine (NBU), says her apartment in Kyiv has been raided by law enforcement officers.

'Ten people in bulletproof vests forced their way with crowbars into my place of residence on Velyka Zhytomyrska [Street] in Kyiv and are conducting a search,' Hontareva told the Interfax news agency on September 12, adding that the men were masked and armed.

Hontareva said that no one was in the apartment when the search was conducted. She said local authorities in Kyiv, including the prosecutor-general and police, knew that her current residence is in London.

Ukraine's State Bureau for Investigations neither confirmed nor rejected the report about the search, but said that offices of the state-owned military concern Ukroboronprom were being searched over a probe of alleged misdeeds by the former NBU leadership in 2016.

A week earlier, Hontareva said that unknown attackers burned a car belonging to her daughter-in-law in front of her residence in Kyiv on the night of September 4.

On August 26, a car ran over Hontareva's foot in London, sending her to the hospital with broken bones.

She said on September 9 that she might apply for political asylum in Britain, alleging that the incidents indicated pressure imposed on her by Ukrainian authorities.

Hontareva's efforts to clean up Ukraine's financial sector as the NBU chairwoman in 2014-18 irked wealthy oligarchs, who critics say have treated the country's banks like their private coffers.

Hontareva also came under fire from some ordinary Ukrainians who blamed her for losses they suffered after she was appointed to follow advice from the International Monetary Fund to partially abandon state support for the hryvnya currency.

During Hontareva-led reforms, international auditors found a $5.5 billion hole on PrivatBank's balance sheet, prompting the NBU to use taxpayer funds to nationalize it.

The bank was co-owned by billionaire oligarch Ihor Kolomoyskiy, whom Hontareva has accused of threatening her and of being behind the incidents in London and Kyiv.

In previous interviews, Kolomoyskiy -- a former business associate of President Volodymyr Zelenskiy -- has said he did nothing wrong at PrivatBank and there is no evidence tying him to the events involving Hontareva and her family.

Hontareva said she started receiving veiled threats from Kolomoyskiy three years ago and public threats in her direction from last year.

Authorities are investigating Hontareva in two criminal probes. In one of these she is being treated as a witness, the other as a suspect for abusing her office as an NBU official.

She hasn't appeared for questioning in Ukraine, calling the cases 'fabricated' and aimed at applying pressure on her for her role in nationalizing PrivatBank.

On August 27, a Kyiv court granted authorities permission to 'forcibly' bring her in for questioning, although she has lived in Britain for a year as a research fellow at the London School of Economics. (w/Interfax)