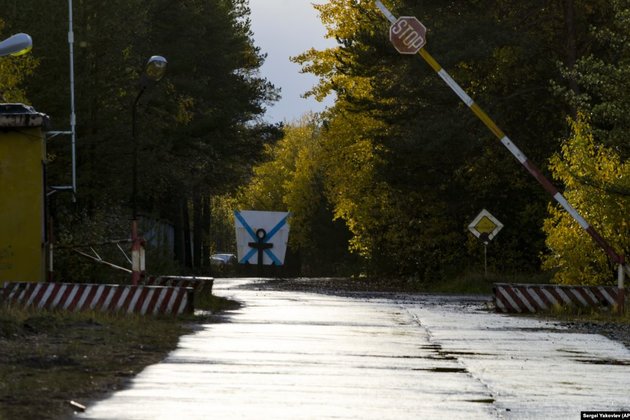 Days after a mysterious explosion at a Russian naval test site caused radiation detectors to briefly spike, a military officer met with worried residents of Nyonoksa, the village where the site is located on the White Sea.

The unidentified officer tried to assuage the concerns of the worried villagers, who can be heard peppering him with skeptical questions. He also provided clues to the August 8 explosion that killed at least five people and sent intelligence analysts from Washington to Brussels to Oslo scrambling to figure out what happened.

'There was ongoing work to test one of the rocket engines, but this rocket engine is fueled by radioactive isotopes. That's the source of the fuel,' the officer was heard saying in the 30-minute video published on August 17 on an obscure Russian news site known as Newsader.

'An extraordinary event occurred, and as a result there was an explosion; it wasn't nuclear, but an explosion of materials that were located on the construction, and the people that were on it were wounded,' he said.

The video could not be independently confirmed by RFE/RL, nor was it possible to pinpoint exactly when it was taken. Still, independent analysts said it appeared to be authentic, and it matched up with other evidence that has emerged since the blast.

Pavel Podvig, a Swiss-based expert on Russia's strategic forces, said the video was definitely genuine. But he told RFE/RL that it was unclear if there was anything truly revelatory.

In the days after the mishap, civilian and military authorities gave conflicting information as to what exactly occurred, how many casualties there were, and where the recorded spike in radiation came from and whether it was dangerous.

The Defense Ministry revealed the incident the same day it happened, saying two people had been killed, but gave no details. Two days later, the state-run nuclear agency Rosatom revealed that five of its scientists had been killed while they were conducting 'technical-engineering oversight' of a test of 'radioactive isotope fuel for a liquid-fueled rocket engine.'

The following day, on August 11, managers at the state research institute where the five were employed revealed in a video interview that the researchers had been investigating, among other things, 'the creation of small-scale sources of energy using radioactive fissile materials.'

While residents of the village of Nyonoksa may be used to military tests, the lack of information on the recent mishap has angered many.

Last week, the pro-government newspaper Izvestia, citing unnamed sources, reported that the explosion occurred during work on a new liquid-propellant propulsion system, and 'nuclear batteries' were part of the system.

Meanwhile, monitoring stations in the nearby shipbuilding port of Severodvinsk recorded the brief spike in radiation levels in the hours after the explosion, but Russian officials emphasized that there was no danger to public health.

Monitors in Norway, hundreds of kilometers to the northwest, detected a small increase in airborne radioactive iodine in the days that followed, but they have not linked it to the Nyonoksa explosion.

Mounting Anger At Lack Of Information

In Nyonoksa, as well as in Severodvinsk and, farther down the coast, in Arkhangelsk, there's been mounting anger over what many say is contradictory and incomplete information from the authorities.

Some doctors at the Arkhangelsk region hospital who treated victims of the blasts have complained they weren't given any information about potential radiation dangers; several dozen doctors were flown to Moscow to conduct follow-up treatment.

People gather in Sarov for the funerals of five Russian nuclear engineers killed by an explosion in Nyonoksa on August 12.

In the video, anger can be heard in the skeptical, sometimes hostile questions that attendees voice toward the unidentified military officer.

The officer tells the crowd that Russian authorities had conducted several previous tests, apparently of the same type of technology or weaponry. 'Who told you that these tests were only the eighth?' he says, speaking over one woman unseen on the camera. 'The tests were being conducted long before that. You don't know anything about this.'

What Was Being Tested?

What exactly was being tested has been the focus on intense speculation. Several analysts have suggested that the item in question may have been a nuclear-powered cruise missile dubbed the Burevestnik in Russian. That's a weapon that President Vladimir Putin himself boasted was under development last year.

And U.S. President Donald Trump added to the speculation by posting a Tweet that stated outright it was the Burevestnik, known to NATO analysts under the name Skyfall.

WATCH: An August 8 explosion in northern Russia, which some have linked to the Kremlin's development of an advanced generation of super weapons, has focused attention on hypersonic missile systems.