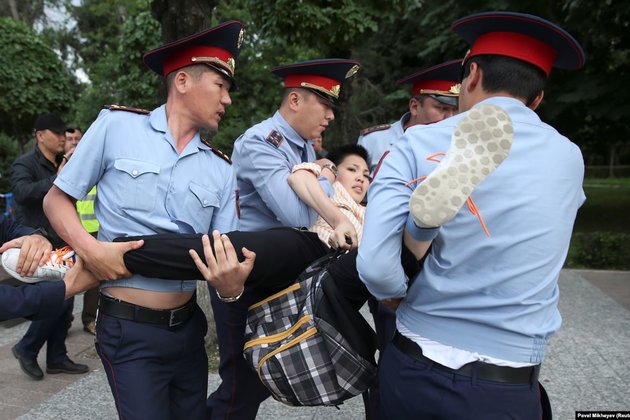 The United Nations Human Rights Office has called on Kazakh authorities 'to respect freedoms of peaceful assembly, expression and right to political participation' following the detention of hundreds of protesters during rallies since Kazakhstan's June 9 presidential election.

'Kazakhstan's actions against peaceful protesters, activists, and journalists during and after the presidential elections on June 9 are extremely regrettable,' Ryszard Komenda, head of the UN Human Rights Office for Central Asia, said.

'The freedom of expression and peaceful assembly are the building blocks of successful and vibrant societies. Any attempt to restrict them unnecessarily and without proper justification constitute risks for stability and social cohesion,' Komenda said.

Demonstrators in Nur-Sultan, Almaty, and other cities in Kazakhstan protested against the official results of the presidential election -- which gave the victory to Qasym-Zhomart Toqaev, the handpicked successor of former authoritarian President Nursultan Nazarbaev.

Kazakh Prosecutor-General's Office representative Saparbek Nurpeisov told reporters in Nur-Sultan on June 13 that the protesters' rallies were 'illegal' because they had not been sanctioned by the authorities.

Nurpeisov said 957 detained people had been 'punished' -- including 670 who were sentenced to between six and 15 days in jail, 115 who were fined, and 172 who received official warnings about taking part in 'illegal' actions.