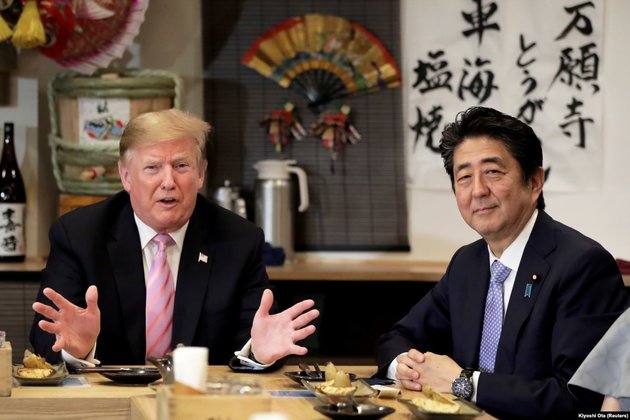 Japanese Prime Minister Shinzo Abe is headed to Iran, saying he hopes to help ease tensions between Washington and Tehran.

Abe is expected to meet with Iranian President Hassan Rohani and Supreme Leader Ayatollah Ali Khamenei during his trip to Tehran -- the first by a sitting Japanese prime minister in more than four decades.

Tehran has been locked in a bitter standoff with Washington since the United States one year ago pulled out of a landmark 2015 nuclear agreement between world powers and Iran.

Since then, Washington has reimposed crippling sanctions on Iran, stepped up its rhetoric, and beefed up its military presence in the Middle East, raising fears of a possible armed conflict.

Before departing from Tokyo, Abe cited 'concerns over rising tension in the Middle East region.'

'Japan wants to do as much as possible toward peace and stability in the region,' he added.

Tokyo is one of the closest U.S. allies in Asia and also has good ties with Tehran.

But observers have expressed doubt over what can actually be achieved during Abe's visit, and said the visit might help boost his image as a global statesman ahead of elections for the upper house of Japan's parliament in July.

Abe's arrival was preceded by that of Japanese Foreign Minister Taro Kono, who held closed-door talks with his Iranian counterpart, Mohammad Javad Zarif.

Iranian officials were quoted as saying that Tehran plans to ask Japan to mediate between Tehran and Washington to ease oil sanctions imposed by the United States.

'Japan can help easing the ongoing tension between Iran and America...as a goodwill gesture, America should either lift the unjust oil sanctions or extend the waivers or suspend them,' a senior Iranian official told Reuters.

The news agency quoted another official as saying that Abe 'can be a great mediator to facilitate that.'

However, a Japanese government official said that Abe will not present Tehran with a list of demands, or deliver a message from Washington, and instead want to play the role of neutral intermediary, according to AFP.

U.S. officials have signaled that Washington is open for dialogue with the Iranian leadership while insisting that force remains an option. Khamenei has rejected any talks with Washington.

Addressing a cabinet meeting ahead of Abe's visit, Rohani said that U.S. pressure on the country had 'reached its maximum.'

'From today onward, the threats and pressures will lose their capacity and will be exhausted,' he added.

In announcing the U.S. pullout from the Iran nuclear accord in May 2018, President Donald Trump argued that the terms were not tough enough to prevent Iran from developing nuclear weapons and did not address the country's missile program or its support for militants in the region.

Iran has denied it supports insurgent activity and said its nuclear program is strictly for civilian energy purposes.

With reporting by AP, the BBC, Reuters, and AFP