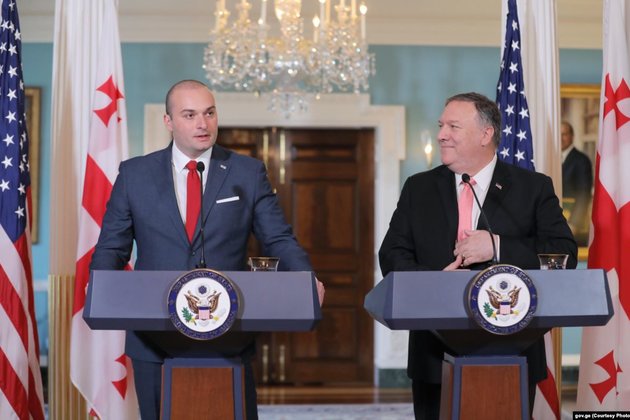 'Georgia has fought to maintain its territorial integrity in the face of Russian aggression, and Russia's unlawful occupation of the Georgian territory, and its failure to adhere to cease-fire obligations,' Pompeo said on June 11 in Washington as he met with visiting Georgian Prime Minister Mamuka Bakhtadze.

'Russia's belligerence is just one reason we're proud of our military to support to the Georgia Defense Readiness Program. We are helping train and equip a self-sufficient force that will ensure Georgia's territorial defense,' Pompeo added.

The country of some 3.7 million people fought a brief war with Russia in August 2008, and Moscow's continued military presence on the country's territory adds to tensions in the region.

Moscow has stationed thousands of troops in breakaway Georgian regions of South Ossetia and Abkhazia since it recognized their independence following the 2008 war.

Georgian President Salome Zurabishvili on June 10 predicted that Tbilisi will regain control over the two regions, saying, 'Gradually, I think, the population in the occupied territories, are understanding that the perspective is not in the north,' that is, with Russia.

In a statement, the State Department said Pompeo and Bakhtadze 'discussed Georgia's partnership with NATO, cooperation on issues of regional security, and reforms necessary for Georgia to ensure the rule of law and fair elections.'

At a 2008 summit in Bucharest, NATO agreed that Georgia will eventually become a member, but no firm date has been set, although the membership perspective for the country has been reconfirmed at every summit ever since.

In his comments, Pompeo said that 'Georgia's leadership role as an aspiring NATO ally is just one reason we're so enthusiastic to work together. President [Donald] Trump has called for all nations to do more to resolve global challenges, and Georgia is doing just that in the fight against terrorism in Afghanistan.'

'Even as we speak, 32 brave Georgian soldiers know that they have given their all while serving alongside Americans [in Afghanistan], and 870 Georgian soldiers serve in support of NATO's mission there,' Pompeo added.

The top U.S. diplomat said the 'prime minister and I also had the chance to discuss Georgia's parliament's responsibility to make sure government agencies act lawfully and deliver what they promise to their citizens.'

Bakhtadze said that Georgia, with 'expanded interoperability with NATO and defense spending -- 2 percent of our GDP,' has all the practical tools to prepare for NATO membership.

He also asserted that Georgia 'is a stable democracy with strong state institutions, with a growing and attractive economy and vibrant civil society.'

In a recent ranking Corruption Perceptions Index by Transparency International, Georgia led the way for the Eastern Europe and Central Asia region with a score of 58, making it 41st on the list of 180 countries.

But the report also warned that Georgia 'faces democratic backsliding, making it both vulnerable to high-level corruption and a country to watch moving forward.

'This downturn is due to a lack of accountability of law enforcement, corruption, and political interference in the judiciary, state capture, and government-sponsored attacks on independent civil society, among other issues.'

By contrast, Russia's score fell to 28 from 29 the previous year, leaving it in 138th place, the same as Iran.