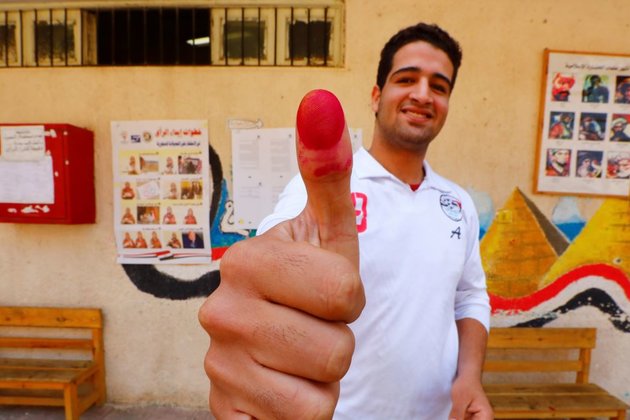 CAIRO - A light to moderate turnout was reported on day one of a three-day constitutional referendum in which voters expected to approve lengthening the president's term in office, and strengthen his powers over the judiciary and the government bureaucracy. Official results are expected in about a week.

A smiling President Abdel Fattah el-Sissi cast his ballot as polling began Saturday morning in a three-day referendum to make changes to Egypt's post-revolution constitution. Those changes will strengthen his hand over parts of the government and lengthen his term in office from four to six years.

Prime Minister Mustapha Madbouli told journalists at a central Cairo polling station that voters should turn out to voice their opinion.

He says that he is casting his own ballot as an Egyptian citizen and urges everyone else to do so, as well, to show a positive spirit in what he calls an important matter.

Sixty-two million Egyptians are registered to vote of an estimated population of around 100 million. A large number of people could be seen at several polling stations in the center of Cairo, while others in outlying parts of the capital and Giza appeared to have a light turnout.

Gamal Noureddin Zaki, governor of Assiut province, told journalists that things were going smoothly on the first day of the referendum and he expected a fairly good turnout after all the ballots were tabulated at the end of day three.

He says that he expects around half of all eligible voters in Assiut to cast their ballots and he stresses that there have been no complaints about problems with voting, so far.

Abdel Aziz al-Husseini, the deputy head of the opposition Tayyar al-Karama Party, told al-Hurra TV that he was not happy with the referendum, since it was extremely difficult to oppose the proposed constitutional changes.

He says that opponents of the changes are only able to express their opinion on social media and at press conferences, but that there is no possibility of putting up posters or engaging citizens at coffee shops and universities.

Ahmed al-Khamis, a member of the Institute of Administrative Studies, told al-Hurra that the most important issue in the referendum is to maintain stability in the country.

He says that it is important to show the outside world that Egyptians are determined to (protect their country), since we are living in an extremely unstable part of the world, with many neighboring countries in turmoil.

Egyptian opposition TV stations based in Turkey and Qatar which support the now-outlawed Muslim Brotherhood group denounced the referendum, calling it 'null and void.' A government opponent, Ahmed Tantawi, said in a video on social media that the referendum 'casts a pall on the spirit of the constitution and the (2011) revolution which gave birth to it.